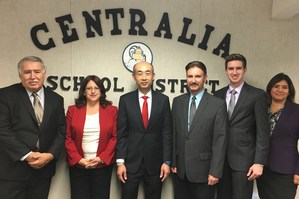 The Board of Trustees at its organizational meeting held on December 13, 2017, selected Henry Charoen as the President for 2018, Elizabeth Gonzalez as Vice President and Steve Harris as Clerk.

President Charoen replaces outgoing President Art Montez.  Mr. Montez reflected on his year as President, and shared that he was proud of the strong start of the implementation of Measure N, the District’s $49 million dollar bond, the continued academic success of each of the schools and the recent Golden Bell award from the California School Boards Association for outstanding for Outstanding Parental/Community Involvement with the Neighborhood Resource Center.  Mr. Montez also expressed his gratitude to the community for their input and praised the District staff for their continued hard work.

Mr. Charoen is an adjunct professor at UCI and has degrees from USC and UCI. Elected to the Centralia Board of Trustees in 2014, he has most recently served the Trustees as Clerk. After thanking outgoing president Mr. Montez, Mr. Charoen stated that he is “humbled and honored to be Centralia’s 2018 Board of Trustees President and looking forward to continuing to be a good steward of Measure N finances while keeping the effects of board decisions on the children of this district at the forefront of all board discussions.”

The Centralia Elementary School District typically holds its regular meetings on the second Wednesday of the month at 5:30 p.m., with some exceptions, in the District Office Boardroom located at 6625 La Palma Ave, Buena Park, California. You can find the Trustee meeting agendas and official minutes on the District website at www.cesd.k12.ca.us/board/.